Whether you drive a factory standard F150 or a custom-built masterpiece, a good set of side steps can be very useful. If you have the money in your budget, it’s worth looking into a set of retractable side steps for Ford F150 models. These special running boards have a sleeker look, as they’ll fold up out of the way when not being used. They require power, and many of them offer a little extra lighting so you can see the steps. If you decide these are the right accessories for you, it’s time to pick out a quality set.

With so many options out there, the process of choosing a set of steps can be a pain. That’s where Ultimate Rides comes in. We deal with these accessories all the time, and know a good set when we see one. Below you’ll find a list featuring our recommendations for the best retractable side steps for Ford F150. Take a look and see if one suits your needs.

After our list, we’ve put together a buying guide with further information. There you can learn what factors came into play for our decision on the best products. Additionally, we’ll tell you more about what we do at Ultimate Rides, as well as the process of installing side steps on your truck.

Note: Be sure to pay close attention to the listed specs for a product to ensure it fits on your truck.

When it comes to retractable side steps for the Ford F150, no company’s name comes up more than AMP Research. They have a pretty dominant hold over the market, but thankfully you can count on their products to get the job done. This pair in particular is for the 2015 through 2020 Ford F150. While the company does have an option out there for the latest Ford trucks, it’s not quite as widely available yet. If you own a truck from one of these six model years, though, you’re in luck! Installation may not be easy, but the end result is going to be fantastic.

The setup features an integrated LED lighting system, and of course retracts out of the way when you close your doors. The product features a five-year warranty from the manufacturer, plus it was made here in the United States. There’s a lot to love about these running boards, and we recommend them for anyone who has the right truck for them to fit. 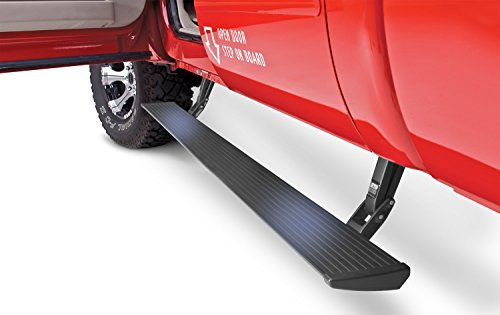 This next option isn’t a typical set of retractable side steps. In fact, it’s actually a normal set of side steps with a power retractable second step. This is especially useful for those who need extra care getting in and out of the vehicle. Plus, this option fits on the 2021 model of the F150, though it’s for the Crew Cab only. We recommend professional installation, as trying to install it at home can be difficult, and some extra filing may need to be done. However, the end result is exactly what’s advertised. As long as you’re not expecting a pair of power running boards in the normal sense of the term, you should be happy with these accessories.

Next up, we have another set from AMP Research, once again covering some of the same model years as our first entry. However, these side steps are a little larger, and fit on the SuperCrew Cab without any trimming required. They’ll also get lower to the ground, helping those who can’t make large steps. Apart from that, they feature the same basic design and work the same way. Additionally you’ll still have access to a five-year warranty from AMP Research. If these are the right fit and suit your situation, you can go ahead and order these steps. Just don’t try to install them on your own unless you’re very confident in your skills.

With our final two retractable side steps for Ford F150 models, we’re going old school. Well, older school at least. These steps are made from Ford F150 models from 2009 through 2013. Everything should be pretty recognizable by this point. The steps can hold up to 600 lbs. on each side without issue, and feature a stainless steel and aluminum design that should hold up quite well. The steps themselves feature a grip that makes it difficult to slip off of. Overall, it’s not hard to see that AMP Research offers the most reliable design out there today.

Our last option again comes from, you guessed it, AMP Research. We’re going back even farther here, with this option suitable for 2004 through 2008 models of the truck. You’ll find everything you expect here: the LED lights, power retractability, and a reliable warranty. If you’re taking good care of your F150, it’s no surprise that it’s still running. These side steps can help you maintain that quality ride you’ve worked so hard for. 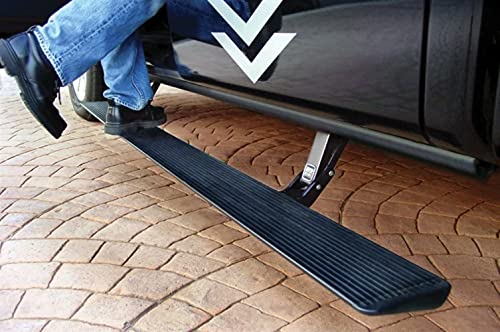 Did you find a set of running boards on our list that work for you? We definitely hope so, but our buying guide is here to fill in any gaps in your knowledge. Take a look below to see how we determine a quality set of side steps, as well as our recommendations on installation. Then we’ll wrap up by telling you what we do at Ultimate Rides.

For many vehicle accessories, one of the main problems is choosing from an abundance of options. That isn’t always the case when it comes to retractable side steps for Ford F150 trucks. There aren’t actually too many options out there. That’s why it’s even more important to do your research on the choices that do exist. In our experience, AMP Research makes products that drivers can rely on for the long haul. Installation isn’t always the easiest, but the products are well-designed and hold up to a lot of use. While ease of installation is a factor in choosing the best running boards, durability and how well the steps actually function are the two most important things to look for as you shop.

It’s true that installing side steps can be a real hassle. Without the right equipment, as well as the experience of having done it time and time again, it’s likely that you’ll make some mistakes along the way, and that’s something nobody wants. Unless you are completely confident in your ability to install your power running boards correctly, we encourage you to opt for professional installation. Many products may require trimming or alteration of some sort to be installed correctly. The process can easily eat up a lot of your free time. Just remember that when choosing which route to take.

At Ultimate Rides, we sell custom vehicles built right here in our lift center. You can order them across the country and we’ll ship the vehicle straight to you. If you’re in the Chicago area, you can also come to us for repairs and vehicle upgrades. We’re located at 38 W. Division St., Coal City, IL 60416. You can contact us over the phone today at 816-634-3900.

Two Brothers With a Dream, Building The Best Ultimate Rides 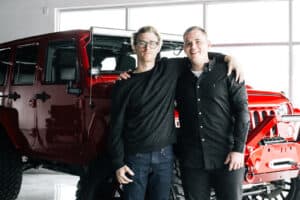 Ultimate Rides consists of two brothers who have been buying and selling custom vehicles for over ten years. Selling lifted trucks by day and writing these awesome reviews by night! They started their Ultimate Rides journey with a third brother Jake, who was a big part of building the business they have today. In 2016 Jake passed away and losing their brother was the hardest thing they ever had to deal with. Even though they had a tragic loss they plan to continue to set a new trend for the auto industry, keeping customers number one. Pushing the envelope on the lifted truck market, these guys love researching and learning about everything in the auto industry!